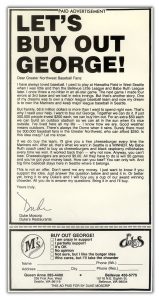 With the 2018 MLB season underway, I recall a time in 1987 when fans rallied behind my idea to buy the Mariners. Back then, team owner George Argyros was not a favorite of the fans. Since the team’s rocky beginnings in 1969 as the Seattle Pilots, the team never saw a profit and struggled to win games. We lost . . .a lot. But our city still loved them. When George announced he was going to sell the team, I decided to buy it and make it a fan-owned team!

How? Well, I figured that if 300,000 fans contributed $250.00 each, we could raise $75 million, give George Argyros $48.6 million and spend the rest of it on an outdoor baseball stadium. People got excited when I told them about that part–watch baseball in the sunshine, in Seattle? They loved it.

I wrote an open letter to the public in the Seattle Times and the Seattle Post-Intelligencer asking for donations. I soon had commitments from various public and private groups for about $10 million. However, while I was out beating the bushes for more investors, Jeff Smulyan approached old George and offered him $76 million for the team, six times what George originally paid in 1981. George accepted. The Mariners were allowed to stay, and eventually, they got a new stadium (we all celebrated when they imploded the disastrous Kingdome) at Safeco Field.

The rest is history, but boy, Seattle Mariners fans really came through. We got close to pulling off my plan.

Every season, hope springs eternal that the Mariners will win the World Series. Will this be the year? Well, whether it is or not, we’re cheering them on at Duke’s locations around the Sound. Come join us for our award-winning happy hour, or any hour the Mariners are at bat.