Farmed Fish Does Not Have a Place at Duke's

Back in the 90’s a hot new trend was sweeping the restaurant industry: farmed salmon. The farmed fish companies promised restaurants consistent access to quality salmon, with no difference between wild-caught fish and their product. The idea of a streamlined delivery system for high-caliber salmon with no apparent drawbacks took the restaurant world by storm, and everybody jumped on board. Including Duke’s…but only for a very short period.

We tried serving farmed salmon at Duke’s for the same reason we try other ideas; maybe it will work. Well, to make a long story short, it didn’t. Personally, I was never crazy about the flavor. Keep in mind that I’d been sourcing Wild Alaskan Salmon from Copper River in Alaska for over ten years by this point, so I had a pretty solid idea about how good wild salmon tasted. In my opinion, farmed salmon just didn’t measure up.

In addition, I’m particular about our sourcing. I like to know everything about where my food is coming from, how it is being treated, and ultimately, how it gets to my customers. So I started looking for the story behind farmed fish, trying to answer those questions.

I knew what I liked: Wild Salmon fresh out of the water!

Soon after beginning my research, I learned a disturbing fact. Fish raised in net pens are fed pellets containing not just nutrients but chemicals or ingredients that dye the flesh of the farmed salmon red. Wild Salmon flesh is naturally red due to their natural food sources. Without the dye, farmed fish are a sickly grayish or yellow color.

Could this explain why farmed salmon seemed to have inferior flavor?

What else was in those food pellets?

What were we actually eating when we ate farmed salmon?

These questions and more surfaced as I investigated further into salmon farming. Finally, I came to realize that the only answer was a commitment to serving 100 percent wild salmon at Duke’s. I could not in good conscience serve food to my customers that I wouldn’t eat. 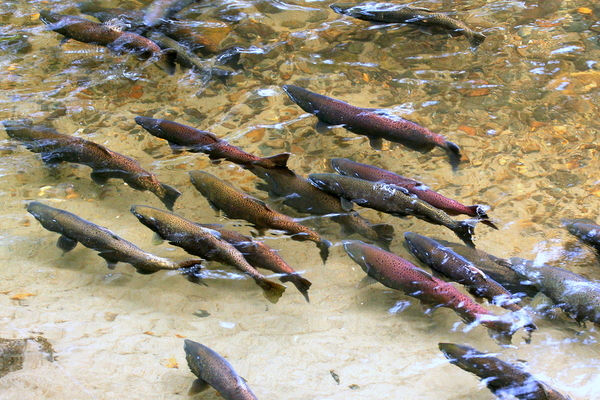 I just think wild salmon tastes better. It’s good and good for you.

While we stopped serving farmed salmon, it remained popular in most other restaurants. So in May 2003, I wrote an newsletter post titled “You Could Be Getting Poisoned if You Eat Somewhere Other Than Duke’s.” My intention was to inform friends, family, and customers about a food product that I considered questionable, and I never stated outright that farmed salmon was poisonous. However, the inference was clear. My main point, in the end, was simple: wild salmon just tastes better.

That email generated a lot of controversy, and I promptly received a formal letter from attorneys representing the fish farms. The letter basically ordered a retraction of my statement about “farmed fish poisoning you” (which I never said) or I would face legal consequences.

Though my concern was genuine, I never meant to take on the fish farms. I issued an apology but I still feel strongly that farmed fish doesn’t have a place at Duke’s Seafood & Chowder and we have been sourcing our salmon only from 100% sustainable fisheries in Alaska ever since. 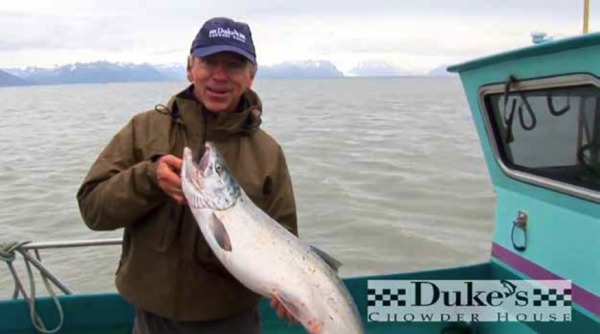 In my opinion, there is no comparison. Wild Salmon wins every time!

Overall, wild salmon is better for the environment and for your own health. Lower levels of PCBs, more essential nutrients, and less damage to the marine ecosystem are just a few of the benefits. This is why I stand by my viewpoint that while farmed fish are a part of the world’s diet, they don’t have to be a part of our menu. And again, I think the strongest argument for eating wild salmon is the simplest: it just tastes better!

At Duke’s we only serve 100 % sustainable seafood, including wild Alaskan salmon. Make a reservation at one of our six locations and taste the difference for yourself.

October 11, 2018
Facebook
Posted in: What is Fresh
More Duke's Stuff